What In The World 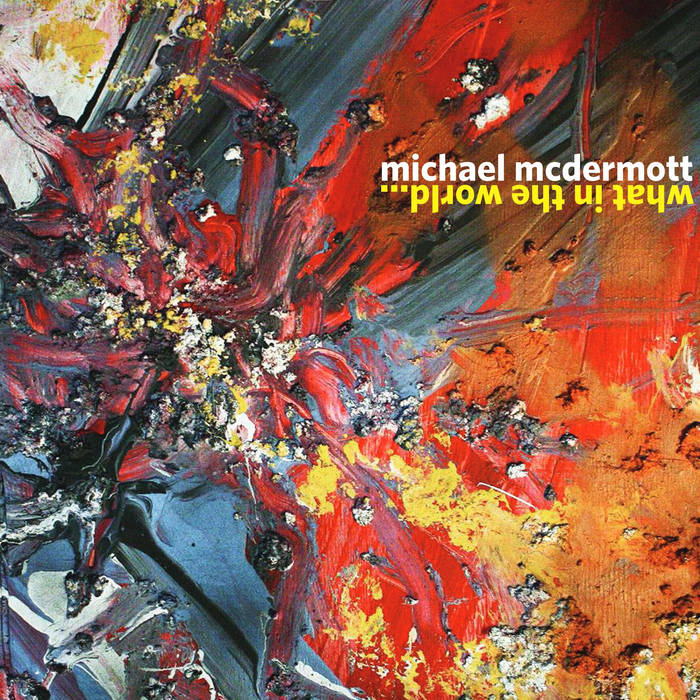 Simply put, What in the World is a rock and roll/singer-songwriter tour de force in a career full of them. “I could have been a contender,” Michael sings, and in the heroic context of the music it comes off not so much a sigh as a celebration: a glorious middle finger to the gods who picked him as the next boy wonder three decades ago and then cut him loose to leave him wallowing by the side of the road. It’s been a hard slog since those days, and there came a time when Michael crawled inside a bottle and pulled the cork tight over his head. “I’m sure you know the story,” he says, “record deal early, some modicum of success, and then the long slow descent and destruction.
Jail, rehab, fortunate enough to be alive, man.” It’s been six years now since he’s bellied up to the bar, and the clear-headed candour suffused in What in the World is evidence of a vital artist who’s still a contender. Like Cool Hand Luke, he’s been knocked down 99 times and gotten back up a 100. And What in the World is a record by a man who knows who he is. Bloody and unbowed.
“I’m from Chicago, like eight miles from where John Prine grew up, so this is how we do Americana in Chicago, mother-------rs!” he laughs, “I gave Nashville a little bit of a try, but decided why would I want to be around a bunch of people like me?” Given the acclaim showered on him from such entities as the Washington Post, who called him, “one of his generation's greatest talents”, and none other than Stephen King, who called him “possibly the greatest undiscovered rock and roll talent of the last 20 years”, plus accolades from the BBC and any periodical you might want to mention, it’s apparent Michael could live anywhere he wanted to, and a devoted knot of listeners would continue to hang on every note.
And despite what the Post or Mr. King might say, he’s not completely undiscovered. In fact, he’s thriving. 2016’s Willow Springs went to Number One on the Euro Americana chart, and the string of critically-acclaimed albums go back to that major label debut, 620 W. Surf, in 1991, and the semi-successful single ‘A Wall I Must Climb’ which boasts the brilliant and prescient lyric, “so quiet is my sickness.” “Yeah,” Michael muses, “that was the game changer.”
Critics were calling me the next Dylan, next Springsteen, I got into Rolling Stone, the New York Times, CNN, all that. And as soon as it came, it was gone. It’s a funny feeling to be 23 or 24 and washed up, you know? It kind of sent me sideways.” While said first platter remains the record people most know him by, that’s starting to change, as his
prolific stream of brilliant work piles up and has become more and more undeniable.
What in the World is a cavalcade of emotions and textures. Guitars ring like Tom Petty one moment, then soothe with warm finger picking the next. The title track is a flat-out rocker and a politically charged anthem for the election year. Michael dispenses with any delicacies and snarls about the “new world order, walls along the border, children
in cages, executive order.” On ‘Blue-Eyed Barmaid’, roles get reversed as the broken
beautiful bartender pours out her troubles to the customer instead of the other way
around. “I see she’s reading Nietzsche, she’s never heard of Del Amitri” he sings wryly. In the beautiful piano driven ‘Die with Me’, Michael sings of more defiance and celebration in the face of trouble, “All the scars we seem to carry. Well, tonight I’ll set it all afire.” Even in a tender musical setting, you don’t get much more rock and roll than that. In ‘Contender’, Michael echoes Marlon Brando’s supreme pathos from On the Waterfront in a bawdy atmosphere of rock and roll horns and utter joy. Other gorgeous nuggets include ‘Positively Central Park’ and the title track, jewels in life’s crown of thorns. There might be a lot of pain being sung about, but the record never succumbs to the darkness. The characters might be buried, but they’re not dead.
Michael tours Europe and the U.S. extensively, and he’s been kicked around enough to
know that today is the day. Yesterday’s gone and tomorrow might not happen. So, in spite of the darkness, music happens, joy happens. And you can’t keep a good man down.