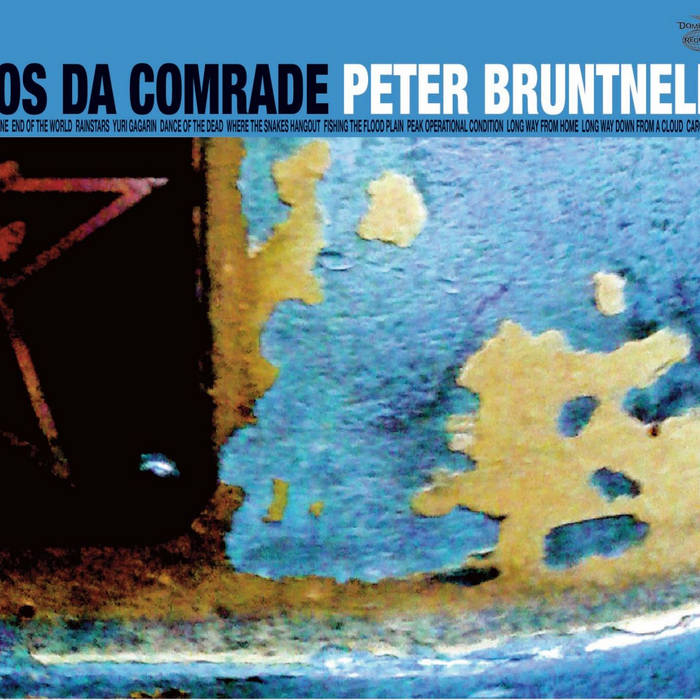 If you ask the likes of Peter Buck, Scott Mccaughey, Willy Vlautin, Jay Farrar, John Murry or Kathleen Edwards they’ll all agree that Peter Bruntnell is a writer with rare and mysterious qualities. It’s interesting that American musicians are so seduced by such a uniquely British artist, as a result of which Peter has toured extensively with Son Volt, Kathleen Edwards and Richmond Fontaine at the request of the artists.
When NME claimed that “Peter Bruntnell’s records should be taught in schools”, they were referring to the particular appeal of the quiet Devonian’s songwriting craft. This new record returns emphatically to the earliest days of Bruntnell’s career, a full-on electric psych-rock experience.
Recorded between February and June 2015 and self-produced by Peter, Nos Da Comrade (which means “Good Night Comrade” in Welsh) was recorded in Bruntnell’s home studio in deepest Devon, and in the village hall in the idyllic village of Mortehoe, where the band simply set up and blasted out the tunes: Mick Clews (drums), Peter Noone (bass), James Walbourne (guitar), Dave Little (guitar), Dai Godwin on backing vocals and Peter Linnane (mastering engineer) on string machine. Peter: “I wanted to make a record that is fairly standard in its approach, with drums, bass, guitars and a keyboard sound now and then. There are some overdubs but a lot of it is played live”.
Peter Bruntnell has a unique ‘way with a tune’ like no other contemporary artists. The most interesting thing about his music, and part of the reason for his devoted following, is the indefinable knack the songs have of locking into one’s emotions in an elusive, intangible but deeply affecting way.
"Bruntnell has a remarkable knack for turning out big, dreamy, melodic, memorable songs" - MOJO
"His songs are warm and beautifully radiant" Uncut
"One of the finest songwriters in Britain" The Independent
"One of England's best kept musical secrets" Rolling Stone
Americana album of the month, 4 stars. Mojo, April 2016
Nos Da Comrade: Track by Track by Peter
1. ‘Mr. Sunshine’: Anti-Donald Trump song about him displacing a Scottish fishing community so he can build a golf course, criminal!
2. ‘End Of The World’: People spend so much time on internet sites they are living in the virtual world more than the real one.
3. ‘Rain Stars’: An unlucky man feels picked-on by the universe, toyed with by mad gods like a character from some Greek myth.
4. ‘Yuri Gagarin’: A young boy dreams of being like Yuri, the first man in space.
5. ‘Peak Operational Condition’: Travelling man, away from home in a strange country, writes to his wife but can't adequately describe what he's experiencing there.
6. ‘Where The Snakes Hang Out’: An idealistic young man starts to learn the bitter lessons of how the world really works.
7. ‘Long Way From Home’: A song of nostalgia. Getting old in the rain of a seaside town, feeling like a ghost and wishing one was young again.
8. ‘Long Way Down From A Cloud’: Reflection on the feeling when love moves out of reach, and you hope it wasn't your fault.
9. ‘Dance Of The Dead’: Solace at a deathbed, reflecting on how the loved one has now escaped his body and gone back into the larger world.
10. ‘Fishing The Flood Plain’: The floods in the Somerset Levels forced people to evacuate - but what would you do if you couldn't get out?
11. ‘Caroline’: Two people who might've fallen in love, but missed their chance by waiting too long and growing apart.

More about Peter It started back in 1995 when Peter signed to Almo Sounds, where his label-mates included Gillian Welch and Garbage. He made two albums for the label: Cannibal and Camelot in Smithereens. Grammy-winner Peter Smith (Sting/Squeeze), who produced Pete’s debut Cannibal, still cites it as “one of the top 3 records I’ve worked on”. In 1999 Peter signed to Slowriver/ Rykodisc and released Normal For Bridgwater, a record that was to be his biggest commercial success to date which won him wider acclaim in North America. Upon hearing the album, Kathleen Edwards told her producer when recording her debut Failer, “I want to make an album like this”. Peter struck up a friendship with Son Volt, which resulted in them touring together. It also saw the introduction to Peter’s band of 17 year-old James Walbourne. As well as playing with Peter, James is now half of the duo Rails with his wife Kami Thompson. Rather than reproduce the Americana feel of Normal For Bridgwater, Peter’s restless musical spirit has seen him strike out in new direction with almost every subsequent album. Four albums for Loose continued to win him admirers - by 2005, The Independent were calling him “one of the finest songwriters in Britain” and Richmond Fontaine’s front man Willy Vlautin named Peter as his favourite singer.
His 2009 Loose album Peter And The Murder Of Crows is filled with psychedelic drones and mellifluous tunes; the album found reviewers and fans alike comparing him with Nick Drake and John Martyn. It was one of Q magazine's ‘Albums Of The Year’ and was an ‘Americana Album Of The Month’ in MOJO Magazine.
Ever inventive, with 2011’s Black Mountain UFO Peter mixed West Coast harmonies with the requisite dab of psychedelia. 2013’s Retrospective featured tracks from all of Peter’s albums to date and was crowned with a re-recorded version and video of ‘Played Out’ featuring platinum-selling Rumer.