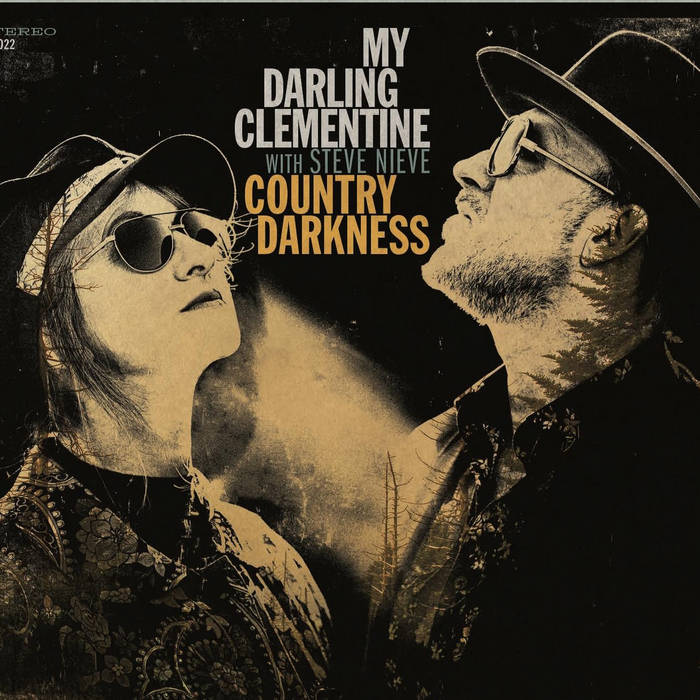 PRAISE FOR MY DARLING CLEMENTINE:
“King and Dalgleish have earned their place in the role call of great country duettists” UNCUT
"MDC mix country gloom with excellent musicianship and very fine songs.” The Guardian

As the nights draw in this winter, MY DARLING CLEMENTINE will present… ‘Country Darkness’.

A new album that throws a spotlight on 12 hidden gems from the Elvis Costello repertoire and vividly reimagines them in the duet’s definitive country-soul styling.

Released on 6th November 2020, the record will see the familiar husband/wife pairing of Michael Weston King and Lou Dalgleish joined by a very special guest in the form of The Imposters / The Attractions original: Steve Nieve, whose inimitable keys and wisdom radiate throughout the release.

Teasing the release with a new single, “The Crooked Line”, the folksy ‘Secret, Profane & Sugarcane’-era Costello number receives a ramped-up and electrifying rework that sets a tantalising precedent of what lies ahead on the upcoming LP.

Out 25th September, you can pre-save the track from 11th September here:
PRE-SAVE LINK

As avid admirers of Costello’s rich back catalogue since his “angry young man” earliest days, ‘Country Darkness’ arrives as both a salutation to the man himself and something of a labour of love for My Darling Clementine. Drawing together a collection of three 4-track EPs for the first time (‘Country Darkness’ Vol. 1-3), the upcoming compilation sees the band host some of the lesser-known marvels from Costello's repertoire and explore their potential for something entirely different; and often darker... Reconfiguring the tracks with shades of Gothic Americana, Outlaw Country and heart breaking Folk, the trademark vocal duet of King’s lugubrious baritone and Dalgleish’s tender siren-song unearth exquisite drama in Costello’s scriptures.

Offering a carefully considered and retrospective selection, ‘Country Darkness’ sees the band take-on a representative range of Elvis’ multiplicitous and ever-changing eras. From his work with the Attractions (“Stranger In The House”, “Too Soon To Know”, “Why Can’t A Man Stand Alone”), to the Imposters (“Either Side of The Same Town”); to cherry-picking some remarkable solo efforts (“The Crooked Line”, “I Lost You”), as well as reappraising a smattering of his inspiring collaborations with Emmylou Harris (“Heart Shaped Bruise”), Grammy-winner Loretta Lynn (“I Felt The Chill Before The Winter Came”), Paul McCartney (“That Day Is Done”), legendary Nashville singer-songwriter Jim Lauderdale (“Different Finger”), and of course, his long standing right-hand man: Steve Nieve.

Synonymous with the Elvis Costello sound, Steve Nieve has worked with Elvis since 1977, recording with him for the first time on his second album ‘This Years Model’. He was a founding member of The Attractions, and now, for over 20 years, one of The Imposters. A Rock & Roll Hall of Fame member, Nieve has become one of the most in-demand session keyboard players in the world with his playing identifiable on countless classic records. Which now includes My Darling Clementine’s ‘Country Darkness’ LP. As the band sought Nieve’s seal of approval for the project, the legendary keyboardist went one better and offered his services to the project instead. Actively involved throughout working with the pair in song selections and arrangements, his unmistakable style is evident throughout.

Pre-produced at Steve Nieve’s home in France, the recordings were then transferred to Yellow Arch Studios in Sheffield where they were produced in collaboration between King and Colin Elliot (who has notably also produced Richard Hawley, Jarvis Cocker, Duane Eddy and more).

As something of an added bonus track, a completely original and previously unheard My Darling Clementine composition entitled “Powerless” is also included on the upcoming album release. Guest featuring Nieve’s playing and bearing Costello’s lyrical fingerprints, this smouldering country ballad between King and Dalgleish closes a collection of remarkable reinventions with a track that confirms there’s more than a little shared DNA between Costello and Clementine.

“Making these recordings took me back to my 19-year-old-self, out buying a copy of 'Almost Blue' during my lunch hour. It was Elvis and Steve’s making of that album which set me, and I think many others of my generation, off along a country path to discover more about this form of music previously only viewed with suspicion. For me it became something of a pilgrimage, a vocation, even a “career.” So this feels like the completing of a musical circle of sorts — to record a selection of some of mine and Lou’s favourite EC country songs with the added thrill of performing them with Steve”.

And on working with Steve Nieve on the project, Lou Dalgleish adds:

“Reflecting on those early years spent listening to my hero of the keyboard [accompanying my personal king of songwriting, EC) was it any wonder that in the spring of 2019, when he sat down right next to me and began his incredible intro to our first collaboration, that I couldn’t sing for crying? Thanks Steve, for making this sulky girl very happy.”

The full tracklisting for ‘Country Darkness’ is as follows:

‘COUNTRY DARKNESS’: TRACKLISTING:
1. Either Side of The Same Town (from The Delivery Man)
2. I Lost You (from National Ransom)
3. I’ll Wear It Proudly (from King Of America)
4. Why Can’t A Man Stand Alone (from All This Useless Beauty)
5. The Crooked Line (from Secret, Profane & Sugarcane)
6. Heart Shaped Bruise (from The Delivery Man)
7. That Day Is Done (from Paul McCartney’s Flowers In The Dirt and I Couldn’t Hear Nobody Pray by The Fairfield Four)
8. Different Finger (from Trust)
9. I Felt The Chill Before The Winter Came (from Secret, Profane & Sugarcane)
10. Stranger In The House (from Taking Liberties)
11. Indoor Firework (from King Of America)
12. Too Soon To Know (from Brutal Youth)
13. Powerless (MDC Original)

My Darling Clementine are Michael Weston King and Lou Dalgleish. Since their debut in 2011 King and Dalgleish have released 4 albums, co- written a stage play/audio book with best-selling crimewriter Mark Billingham, played over 800 shows worldwide, and collaborated with a wide variety of major artists including Graham Parker, Kinky Friedman, The Brodsky Quartet, and Jim Lauderdale. They have picked up various awards for their heart-on-sleeve song-craft and heavenly harmonies. Earlier this year, Dalgleish and King returned to the studio to craft the follow-up to their 2017 country soul album ‘Still Testifying’.

Often known to cover his songs in their transfixing live sets, My Darling Clementine put into action the dream of a lifetime as they began working on the Elvis Costello-inspired ‘Country Darkness’ project in 2019. Initially released as a series of limited edition 12” EPs comprising four-tracks each, their first two volumes have proven sell-out successes; clocking up over 20,000 streams on Spotify and receiving global praise, with The Alternate Root (USA) hailing: “My Darling Clementine and the country songs of Elvis Costello are a match made in heaven.”
Their third and final EP in the series (‘Country Darkness: Volume 3’), will receive release on 23rd October as a limited edition vinyl exclusive (available for preorder from 25h September). A very limited and collectible 3 x EP box-set in a specially designed slipcase will also be available.

The ‘Country Darkness’ album (compiling all tracks featured across the EP Volumes 1-3, plus bonus track “Powerless”) will be available on CD and digitally on 6th November 2020, via Fretsore Records.