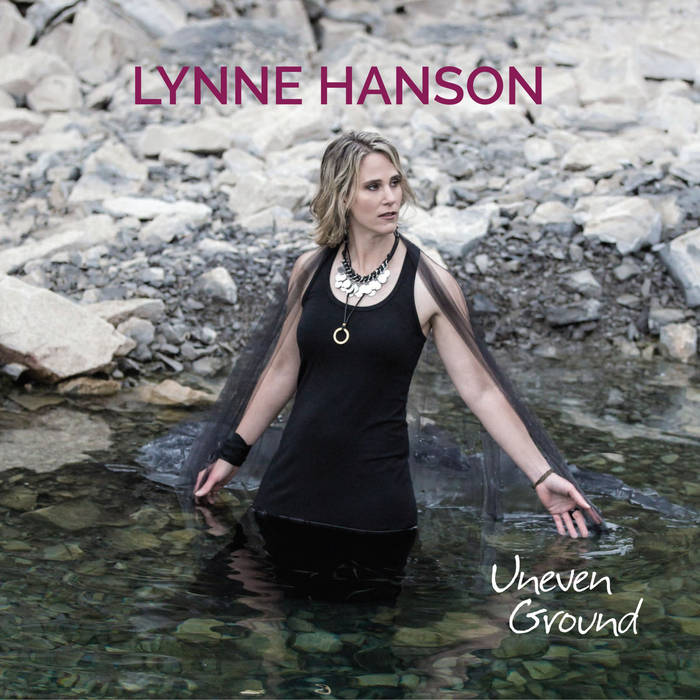 We all carry a little bit of weight on our shoulders, but being compelled toward songwriting is a welcome burden for Lynne Hanson. At first listen, her warm, gritty, boot stompin’ music leads you through the southern USA, though Hanson hails from Ottawa, Canada. Her sound is born honestly through a lifetime of experience and influence, expressed through the rock, blues and roots that bleeds from her very being. With a liberal amount of Texas grit and a polished Nashville sensibility, Lynne’s songs are familiar and comfortable, yet fearless and strong. She likes things a little rough around the edges, but her deep bluesy croon is pure and full of fortitude. No matter what the song, there’s a weight and a warmth to her expression.

"She's made the only roots rock record of [the year] to hold a candle to Rosanne Cash's "The River and the Thread" ~ M. Barclay, Cambridge Times

In her brand new release Uneven Ground (2017), produced by Winnipeg’s Scott Nolan, Hanson explores the realm of giving sound advice through songwriting, and fighting back against the devil within us. Permeating the recording is a restrained intensity, elevated with a finger picked beat, beautiful piano accompaniments, dobro and wind instruments. The album leads out with the lush electricity of “Carry Me Home,” winding into down-home roots ballads like “Stronger” and “Just For Now”. The title track “Uneven Ground” is a full-on blues assault, conjuring images a glamorous chanteuse stretched out in front of a baby grand in a smoky nightclub. “Counting Heartbeats” and “Every Honest Misstep” each have a unique, driving, rain-on-the-windshield quality; with a pace that leans in on the gas just a bit. All together, Uneven Ground is an authentic expression of Hanson’s rustic style, brimming over with imagery and cleverly penned lyrics, and a crystal clear production. It steps proudly into the next generation of roots and blues music, while still respecting traditions.

Growing up in Ottawa, Canada, Hanson started playing guitar as a teenager, eventually working her way to her award-winning debut, Things I Miss in 2006. Two more albums quickly followed, Eleven Months (2008) and Once the Sun Goes Down (2010). Each new release garnered critical praise, earning Hanson a Canadian Folk Music Award nomination in 2009, an invitation to the Kerrville Folk Festival, and the prestigious Colleen Peterson Songwriting Award, administered by the Ontario Arts Council. After a few years hiatus, Lynne Hanson returned with a new approach to songwriting, releasing her fourth studio album River of Sand in 2014 with producer Lynne Miles; a JUNO-award winning artist in her own career. River of Sand stands out as the creative output of the personal journey endured over her four-year break, and saw her writing mature into a more intuitive and visceral style.

Lynne Hanson has toured across Canada, the US, Europe and the UK, either solo or with her band The Good Intentions. She’s showcased in Austin, Phoenix and Memphis, toured in support of Grammy nominated artist Gretchen Peters and Steve Forbert, and performed at the legendary 100 Club in London England and the Bluebird Cafe in Nashville to name a few. She continues to tour throughout her established areas and expand into new realms with tours across Canada and Europe planned for 2017.