by My Darling Clementine (June 2) 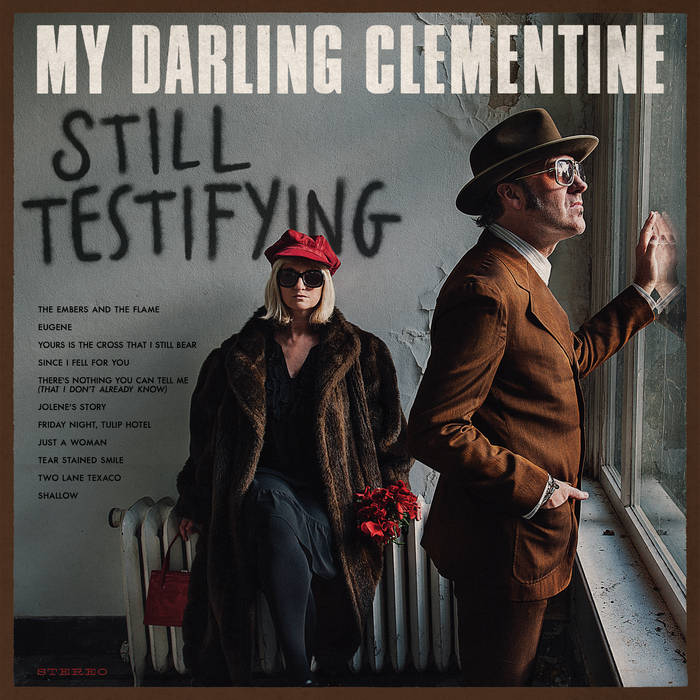 listen to 5 tracks of the upcoming release for My Darling Clementine:

For what began as something of a side project in 2011 for husband and wife Michael Weston King & Lou Dalgleish, My Darling Clementine is now very much centre stage with 3 albums, over 400 shows across Europe and N. America, some ingenious musical collaborations, accolades and awards, and an ever growing fan base with a genuine love of their music.
Still Testifying is a further step away from the “countrypolitan” style of their much lauded debut How Do You Plead? And the 2013 follow up The Reconciliation?
The pedal steel has been joined by horns, the twang has given way to wah-wah & groove guitar, and the fiddle replaced by strings. This is more Delaney & Bonnie than George & Tammy, revealing a further move away from Classic Country as they embrace Gospel and Country Soul, channelling the likes of Dan Penn, Micky Newbury, Goffin & King and Bacharach & David.
Still Testifying may have been recorded in South London over the summer of 2016, but the warm southern winds of Muscle Shoals, Alabama, and New Orleans, Louisiana were clearly blowing along Tooting High Street, straight into the Gold Top Studio. And yet, the English north wind doth also blow, down from the Lancastrian and Yorkshire moors. Listeners may even feel the spirit of the Brighouse and Rastrick Brass Band echoing through some of these new songs too.
Dalgleish and King have not completely overlooked their country music leanings, their re-knowned, country melancholy is still evident on some songs. The band’s sound and musical landscape may have changed a little, but the core of My Darling Clementine remains the same: Two adults, a man and a woman, still married, still singing to each other, still singing about each other, still singing for (or against) each other ..……. And still testifying.