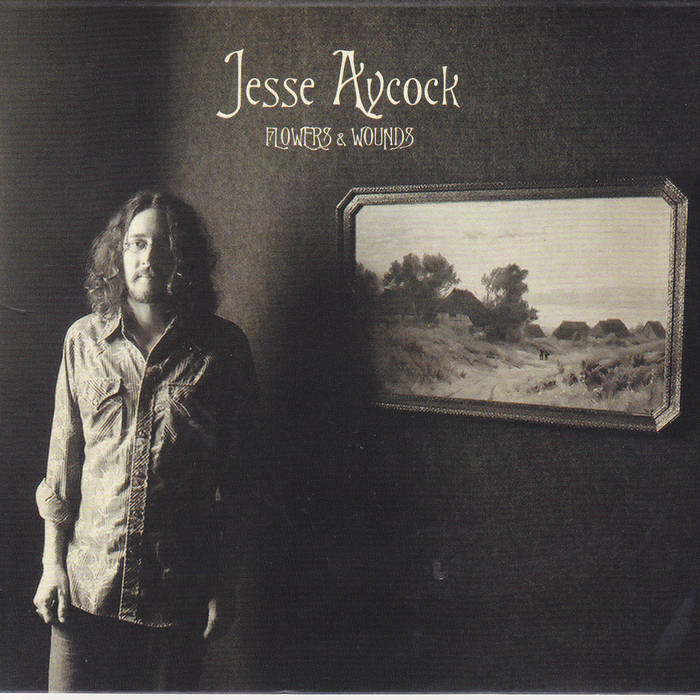 Jesse Aycock's latest album "Flowers & Wounds" was recorded @ the legendary Church Studio in Tulsa, OK (Once home to Leon Russell's Shelter Records). Tulsa native Eric Arndt, along with Neal Casal, and George Sluppick of (Chris Robinson Brotherhood) make up the rest of the band. It also features guest appearances by David Hidalgo (Los Lobos) Jimmy Karstein (JJ Cale, Eric Clapton, Joe ) Indy Gratto (Boondogs), and Al Gamble (City Champs). Flowers & Wounds was mixed by Jason Weinheimer @ "Fellowship Hall Sounds" in Little Rock, AR, & produced by Jason Weinheimer and Neal Casal.
Jesse Aycock is a singer / songwriter from Tulsa, OK that has built a strong fan base nationally and internationally. Highly-respected by his peers as well, Neal Casal, guitarist for Hard Working Americans, Chris Robinson Brotherhood and Ryan
Adams & The Cardinals recently had this to say, “I’ve known Jesse a long time. He’s great. He’s one of those guys who really deserves more recognition.”
His music is sweeping with beautiful melodies, old school tones, and lyrical depth that is remarkable for someone his age. His style touches on everything from traditional folk, psychedelic, country, and early rock, which makes him appealing to a wide audience.
Jesse’s latest release was recorded at the legendary Church Studio in Tulsa, OK, owned in the 70’s by Leon Russell. For the session, he brought in Neal Casal on guitar, George Sluppick (Chris Robinson Brotherhood, JJ Grey & Mofro) on drums, as well as Eric Arndt on bass. Other contributors include David Hidalgo (Los Lobos) on guitar, Tulsa legend Jimmy Karstein on percus-sion, and Al Gamble (St. Paul & The Broken Bones) on B3. Recommended tracks: “Out to Space” , “House of Love”, and “Where’s The Light”
Jesse is a member of super group Hard Working Americans, as well as Paul Benjaman Band and Elizabeth Cook. He’s quickly become a studio artist that is in high demand for his prowess on lap steel, pedal steel, and electric guitar. Catch him on his own tour or with any of these other great bands.