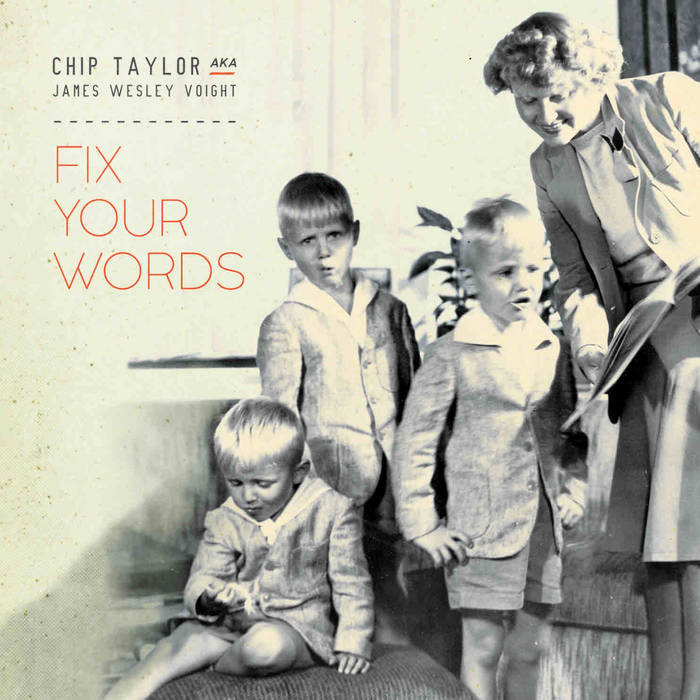 Although Chip Taylor is most famous for writing two especially iconic songs, that is only part of the story, as The New York Times wrote: “If you only know him as the as the guy who wrote ‘Wild Thing’ and ‘Angel of the Morning’ — you don’t know him! Chip Taylor is making some of the most distinctive acoustic music around today.” With the release of Fix Your Words, he continues to create timeless, thought-provoking music.

The 11 all-original songs on Fix Your Words feature two distinct sides. The amazing title track leads side A through the quiet, reflective batch of prayerful thoughts. Side B, subtitled “When I Was a Kid,” is an inspired meditation on the power of memory and sadness and features some of the most emotional and affecting songs of Taylor’s lifetime of songwriting.

As with Taylor’s The Little Prayers Trilogy (Mojo called it “a masterpiece;” while Uncut said it was “the crowning glory of a storied career” and placed it on its Best of 2015 list), the new album was co-produced by keyboardist Goran Grini. It also features Chip’s longtime compadre, master guitarist John Platania (Van Morrison), as well as drummer Tony Leone and bassist Tony Mercadante.
Chip shared these notes he wrote on the writing and recording of Fix Your Words: CHIP TAYLOR: The first songs I wrote for Fix Your Words were written pretty much how I usually write. Which is: I strum guitar chords. The chords and tempos are not predetermined. I keep my mind blank. I let emotion move my fingers. When some emotion appears in some form (words or sounds) that physically send a chill through my body (one that embraces me in the warmest way), I play that emotion again, recording it on my iPhone without trying to make any sense of it.

If the chill is still there, it’s exciting to see where the emotion/song is going. I try to keep my brain out of it as much as possible…using it in the final stages to make a bit of sense out of it. But if the chill is strong without a great deal objective “sense,” that’s fine with me. When I’m prolific, the chills come often. They have been coming often these last several years. That’s a rewarding thing for me, as it brings a sense of peace.

Looking back, these songs seem to be prayerful in nature, maybe a continuation of emotions from my “Little Prayers Trilogy” album from a few years ago.

Then I wrote "When I Was a Kid," a song that reflects my memory of the power of the Motorola radio that lived in the hallway outside the Voight boys' bedroom and the kitchen. It was a strong reminder of the love I have for sad songs. After I wrote it, I let some minutes pass, then got in a quiet space with guitar in hand and got totally brain silent, letting a specific tough emotion of sadness come over me.

As that happened, “When He Goes...He Goes” wrote itself in minutes. The chill was so strong in that song that the specific emotion of certain words from it inspired two other songs, “Crazy Dreams Crazy” and “You Just Think You’ve Changed Your Mind.” In other words, the last two songs are actually songs within a song. I don’t remember doing that before and I love the effect. The chill stays strong for me stays throughout the entire group.

Because the two groups of songs for the Fix Your Words album were written in such a different emotional manner, I decided to let them have their own grouping title, Side A and Side B. Even though the number of songs is unbalanced, it felt like they needed to be separate in some way and reflect exactly the spirit of each group.